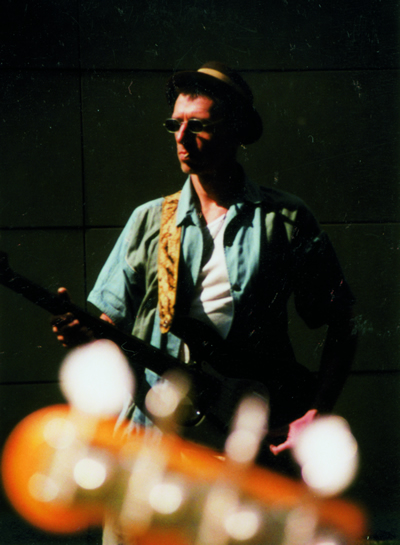 Wolf-Ruprecht "Rupi" Schwarzburger is a bass player. He is a specialist in jazz, funk, blues, R&B. He works in various bands, as well as a freelancer at recording sessions, on live concerts and tours.

Born in Gelsenkirchen in 1956, he grew up in a family of musicians. Making music has always been part of his everyday life. He switched from the violin to the double bass and later to the Fender Bass.

From the end of the 1970s after extensive studies everything went very quickly:
at Streetmark he met Wolfgang Riechmann who immediately booked him into his live band. Christof Spendel invited him to his Latin Circus, Jack Robichaud hired him for his rock'n roll band The Cigarettes.

At that time there was still a lot of work to be done in the studios: commercials, film music and recordings were still recorded "by hand" by musicians. Rupi recorded bass tracks for various producers, bands and artists. Jennifer Rush, Terence Trent d'Arby and Bläck Föös may still be known to some.

There were in the 80s band projects like the legendary Eddie McGrogan Band from Münster/Germany or the Lost Gringos of the Düsseldorf avant-garde label ATATAK.

He also worked as a producer, Composer and arranger for numerous record projects, for advertising and film music for various large advertising agencies as well as for the Rudas Studios in Düsseldorf.

From 1990 on Rupi played for Ergün Aktoprak and his band SES. The Turkish-oriented world music he gave the heavy funk groove.

In 1999 he recorded his much-noticed solo debut "Die Sonne". It was released in 2000 by monoeins records.

In 2001 Tony Brown made the popular remix "Die Sonne@T.H.O.R.Music" for Unique Records.

In 2002 he became a member of the Dortmund street hip hop project KONTRA, led by Jochen Schrumpf with concerts and workshop tours throughout Europe.

From 2012 he played the double bass in the Turkish Chamber Orchestra under the direction of the composer and pianist Betin Güneş at various concerts and classical music festivals.

From 2016 he was heard by various artists, including Markus Wienstroer's U60 , Ergün Aktopraks Tan, Axel Heilheckers Blues Turn Red.

In 2019 the reissue of Rupi's first solo album "Die Sonne" was released on JazzSick Records / Membrane.

"Das Konzert Album" followed in 2021 - the recording of an online concert by Rupi in the Jazz Schmiede Düsseldorf on JazzSick Records.

In 2022 the third solo album "Immer Spass auf den Backen" was finally released on JazzSick Records / Membran. It was planned for a long time and was supposed to be released in 2020. The Corona restrictions have messed everything up. It bears the subtitle "I like to think back to my time in the Ruhr area" and musically continues the development that began on the album "Die Sonne".

Here are some pictures from old and new days:

Photos from the box 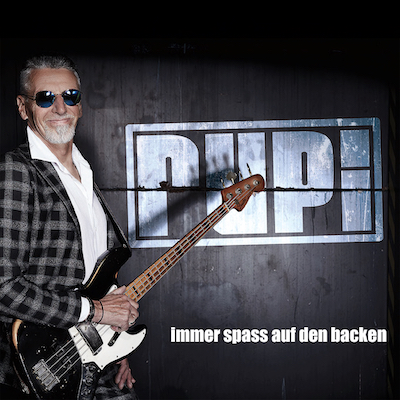 Immer Spass auf den Backen which means something like "Always having fun" is Rupi's third solo album. As a native of Gelsenkirchen, a city in the Ruhr area, he processes memories and experiences from his youth in this city in his compositions.

The album also bears the subtitle "I like to think back to my time in the Ruhr area". The songs form a retrospective of life in the Ruhr area back in the 1960s - impressions, visions, memories - a life in the rhythm of industry - the destruction of war is still everywhere - hard work - gamblers - colliery closure - football - quite normal everyday life, unsentimental but touching - and always having fun - immer Spass auf den Backen.

The songs are, as always with Rupi, stylistically very independent and musically difficult to classify. He has created a fascinating mix of jazz, urban beats, funk, industrial, lounge: the sounds are almost psychedelic - pumping beats - catchy melodies - burning solos - playing with associations - visions - film scenes... Rupi received support from the cream of the club, jazz and world music scene - his longtime musician friends and colleagues. With their brilliant playing - everything is "hand-played" throughout - they give the music its magic, make it unique and very, very explosive.To top it all off, British producer and sound engineer Tony Brown contributed the mixes. Tony is an old friend of Rupi's, best known for his work for Samy Deluxe and Peter Fox. The result is a fascinating club sound - with an addictive factor.

Immer Spass auf den Backen was released 2022 on JazzSick Records (5162 JS).
You will find it on all streaming and download platforms
It is also available as CD in all stores and in the JazzSick Online Shop. 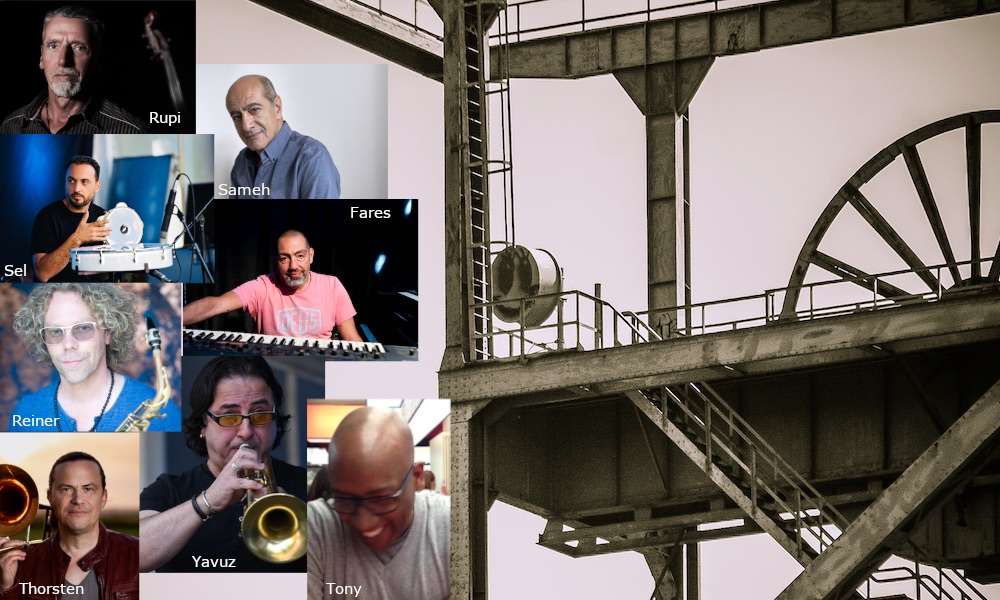 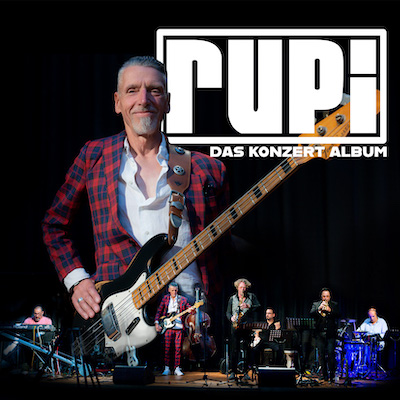 Das Konzert Album which means "The Concert Album" is Rupi's release from 2021. Originally a studio album with sponsorship from the state of North Rhine-Westphalia was planned. However, the studio recordings with the entire band could not be carried out due to Corona requirements. That's why Rupi decided to record a concert. Peter Weiss and the association "Jazz in Düsseldorf" kindly made the Jazz Schmiede Düsseldorf available as a location. However, the concert couldn't really be "live", because in the middle of the pandemic it was only allowed to take place without an audience - a strange feeling on the stage in front of an empty hall.

The songs are a mix of Rupi's compositions from his album "Die Sonne" and from the upcoming 2022 album "Immer Spass auf den Backen".

Even without the all-important live audience, the songs have their very own atmosphere and magic - full of energy and excitement. Pumping beats - spherical sounds - burning solos - the listener goes through a ride of emotions and dives into a world that he no longer wants to leave.

Das Konzert Album was released in 2021 on JazzSick Records (5151 JS).
It can be found digitally on all common platforms such as Amazon, Apple Music and on streaming services such as YouTube, Spotify, Amazon Music, Apple Music.
You can buy the CD in the JazzSick Online Shop. 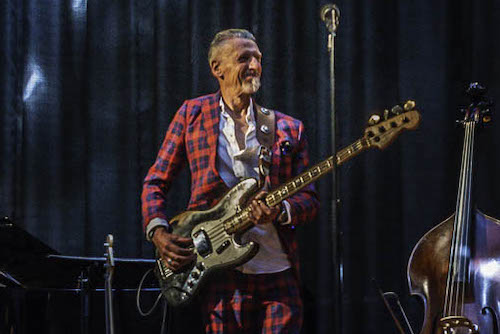 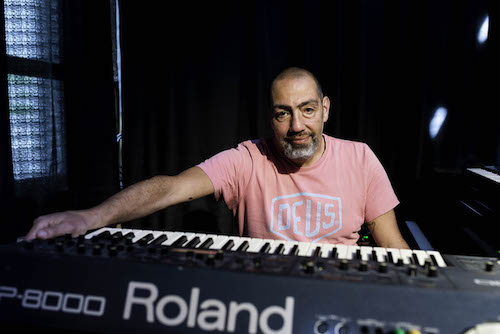 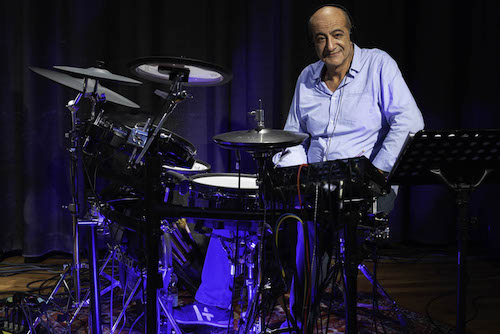 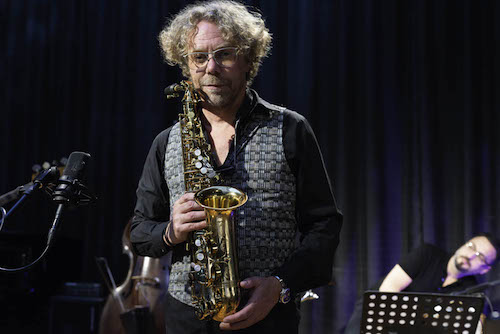 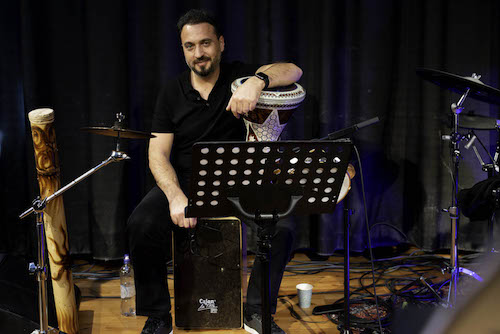 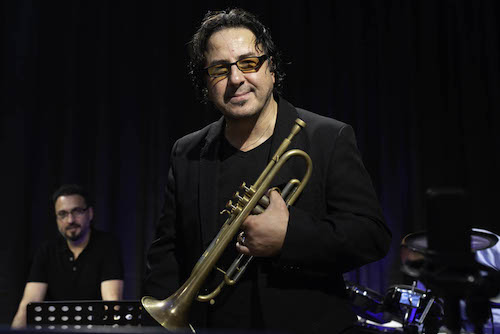 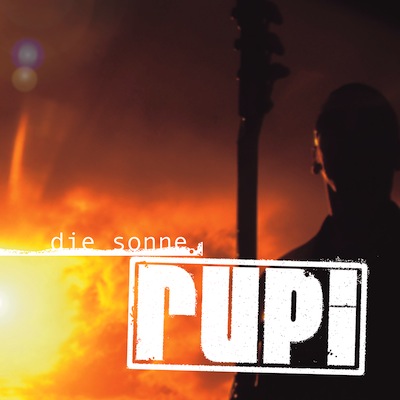 Die Sonne, which means "The Sun" is Rupi's first solo album.
He had been collecting musical ideas for a long time. After many years working as a "sideman" he had accumulated a lot of material. In 1998 he started to choose and work out songs.
He specified his musical concept and for months he developed the special effect sounds, which are rather unusual for the bass, which determine the structure and sound pattern of the songs.
Support for the recordings came from wonderful, dear friends and colleagues who helped him to implement his ideas.

The result was "Die Sonne", a concept album with its own atmosphere. It got its own style - jazz, funk, trance - in other words club sound at its best. Everything is played by hand. Each song leads to the next. The theme of the sun keeps popping up many times. The music takes everyone - on a journey with the sun around the world. It connects everything with each other - all people, continents, cultures, sounds, rhythms.
Music - the common language of people all over the world.

Die Sonne was released again on JazzSick Records (5122 JS) in 2019.
Digitaly it is available on all common platforms such as Amazon, iTunes and on streaming platforms such as YouTube, Spotify, Amazon Music, Apple Music.
It is also available as CD in all stores and in the CD in the JazzSick Online Shop, 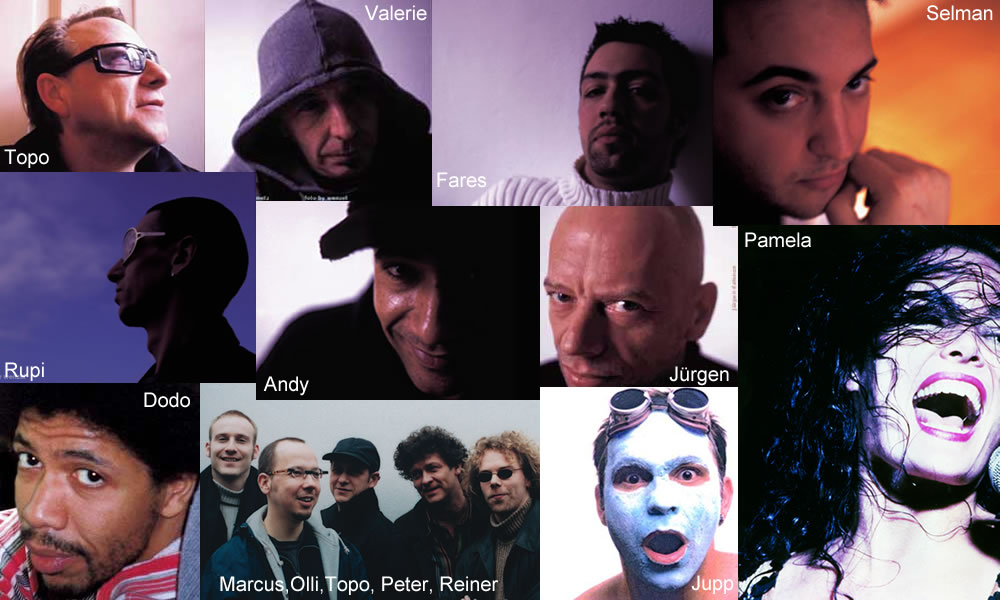 Here are some press comments on Die Sonne:

If you have any questions or bookings, if you would like to have "Die Sonne live" on stage, please email me!

For press use there is all information about Rupi with photos in print resolution and text in RTF and PDF format (41.2 MB).